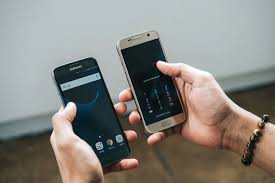 Samsung Galaxy S7 Vs S7 Edge: Here you will get all the information on the product you are going to choose for your long-term use, which will become much easier to decide which one to go ahead with. We will be comparing the two Samsung flagship model of Samsung, which are Samsung Galaxy S7 and Samsung Galaxy S7 Edge. Samsung has put many efforts to differentiate its latest phones. Be it the first phone of yours or planning to switch to a better model, all your queries are going to answer here.

Here you will the difference in points that plays a critical role in deciding the performance and use of your phone covering the technical specifications. First, we will talk about the unique features, so that you can conclude a phone as per your requirement.

The Samsung Galaxy S7 Edge has a bigger screen of 5.5 Inch with a variation of

8%, which is going to make your reading, web browsing and gaming going to make more pleasant, which makes it slightly taller and wider, and it’s 5g heavier as compared to Samsung Galaxy S7.

Read Also:How to Get Sleeper Simulant in Destiny 2: A Complete Guide

The phone name also talks about its unique features as the phone has curvy sides, with the gorgeous look Samsung phone is more comfortable to hole too.

The Phone comes with Android v6.0 (Marshmallow), which gives you a better OS to operate. It has a non-removable battery Lithium-ion battery of 3600 mAh which gives a long usage time.

Both the Flagship models of Samsung have many similarities in terms of software and hardware specifications, which we are going to highlight to make it easy for you to choose your phone.

Both the flagship models are featured with 2.3 GHz, Octa-Core Processor, Adreno 530 GPU, and 4 GB of RAM. They both have MicroSD card Support with Hybrid Slot, which is a returning feature, which Samsung has included in the demand of the customers. Both the handsets are water and dust resistant as it has IP68, so using them in rain will not affect your user experience and phone life span. The fingerprint scanner has continued its presence into the home button to differentiate the user interface as compared to other competitor phones in this competitive market. They work flawlessly without any lag in unlocking the phone.

The most talked feature the Samsung Galaxy S7 and S7 Edge share is the camera on the back and the front. Both the phone supports a 12 Megapixel Sensor at back and 5 Megapixel at the front with the new and improved performance. The 12 Megapixel supports the 1.4-micron pixel, an f/1.7 aperture, and optical image stabilization that are normally called OIS.

Read Also:Best Radar Detector You Can Buy: A Complete Guide

It features Face detection, Geo-tagging, Panorama, Touch to focus with the dual-pixel and autofocusing technology to make it an excellent piece of engineering expertise. They take excellent photos under any lighting conditions may it be dark or sunny, what you will be getting is a beautiful picture to capture the precious moment of yours. It has a 4K @ 30fps UHD video recording and both the model supports LED flash. It does not matter on your skills be it an amateur or professional photographer, you will be able to take some amazing shots with both of these Samsung flagship phones.

Read Also:Best Color Laser Printer You Can Buy in 2021

If sensors matters to you then relax both the Samsung, models have the necessary Accelerometer, Gyroscope, Compass sensors. To continue your entertainment without any hardware it comes with the 3.5mm Headphone Jack and NFC In terms of S7 Vs S7 Edge Durability both the models comes with the display type of Corning Gorilla Glass 5 with Screen Protection which features Color Super AMOLED screen (16M colors) with the aspect ratio of 16:9.

When it comes to the Specifications of the Samsung Galaxy S7 and Samsung Galaxy S7 Edge both have a tie. They have Qualcomm Snapdragon 820 processors and 4GB of RAM, which gives a super speedy performance, a feature that will not hamper your gaming experience.

In terms of Battery life and Charging, the S7 has a 3,000mAh battery, while the Galaxy S7 Edge has a 3,600mAh lithium-ion battery pack. The slight upgrade in battery size by 600 mAh should be negligible as the Edge has a larger screen size, but it matters on the ground to have a bigger picture with long battery life. Both the phone support Quick Charge 2.0 via Micro USB and wireless charging which boosts the battery charging in minutes. So, The Samsung Galaxy S7 Edge is a clear winner over here.

Many people are searching for the S7 Edge Vs S8 feature but until date, there has been a cutthroat completion between S7 Vs S7 Edge.

Read Also: Best capture card you can find in 2021

We prefer the Samsung Galaxy S7 Edge. It’s more attractive in looks and has a better user interface with battery life, bigger screen, includes useful edge software, and everything else is similar when we compare with Galaxy S7 in features. It is more attractive, innovative, and in the end, it will be a more desired model. The Samsung Galaxy Edge has a special feature that no other offers and that makes it different from others as it solves the problem of one-handed users, the Galaxy S7 Edge is the phone to buy.

Ecobee Vs Nest: Difference between the two & how to pick the best