ComfilePi has updated its IP65 classified industrial panel PCs and the Raspberry Pi CM3+ in various 7-inch, 10.1, 10.2, and 15-inch configurations with new features such as eMMC and open heat sink. 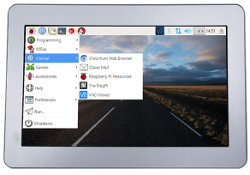 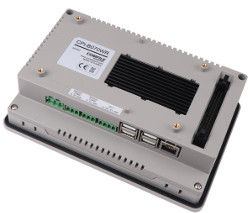 ComfilePi CPi-BV070WR, front and rear
(click on images to enlarge)

If we look further, we see that Compile has recently updated its entire ComfilePi product line, including the 10.1, 10.2, and 15-inch models, to the RPi CM3+. When we reported the 15-inch ComfilePi CPi-A150WR at the end of July, it was still using the CM3.

Compared to the Raspberry Pi CM3, the main difference between the CM3+ and the Raspberry Pi CM3 is the additional eMMC storage capabilities that Compile offers for upgraded PC panels. Although the CM3+ switches to the new Broadcom SoC BCM2837B0 with 4 Cortex-A53 cores that can operate up to 1.4 GHz, the CM3+ remains at 1.2 GHz. Why not just wait for the PC panels based on the new four-wheeler -A72 Raspberry Pi computing module 4, similar to the RPi 4, you could say? They will undoubtedly appear, but since CM4 has a new B2B port, this may take some time. 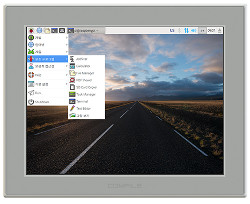 ComfilePi CPi-A150WR, front and rear
(click on the images to enlarge).

The new CPi-A070WR is the only model with a large external heat sink, although Compile may be testing it here for future CM4-based panel PCs. In addition to the improved thermal performance of the CM3+ heat sink, the frequency shrinkage of the SoC is reduced (or completely eliminated), according to Camfil.

Here are the six ComfilePi models with their main differences, with the links below to previous LinuxGizmos products:

In addition to the above differences, there are differences in display specifications, such as image size, contrast and brightness, and voltage variations, as shown in the diagram below. They are all equipped with pressure-sensitive resistive touch screens. 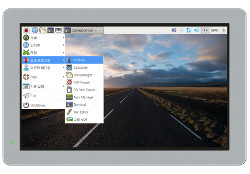 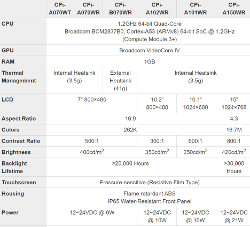 Otherwise, the points are the same. All panel PCs are equipped with a 10/100 Ethernet port, 3 USB 2.0 ports, and a USB port for the eMMC device. Other features include a MicroSD slot and an audio connection.

Compile provides open-pin connections for two serial ports, each sorted on a separate TX and RX port. While the first ComfilePi Panel PC’s had two RS-232 interfaces, now they all have RS-232 and RS-485 interfaces.

There are also modular connections for the I2C interface, which can be accessed via separate SDA and SCL connectors. The same connector bank combines a 12-24V input and multiple ground connections. There is also a 5V output, and you can purchase an optional 24V DC power supply that costs $24. The piezo bubble is also on board.

ComfilePi systems offer a 40-pin pinout with 22x GPIO, which is almost the same pinout as the RPi 3 SBC. The GPIO is equipped with a transparent level switch (3.3 to 3.3 V) for ESD protection. All systems are IP65 certified and operate at temperatures between 0°C and 70°C.

ComfilePi computers come with the Raspberry Pi OS image and support the Compile AdvancedHMI software, which is based on the .NET framework and the Visual Studio design environment. Panel PC’s can be programmed in C, C++, Java, JavaFX, Javascript, Python, C#, vb.net, Rust, D, and Nim. They also support .Net Core 2.0 and CODESYS applications.

ComfilePi Panel PCs are available in silver or black at the above prices. For more information, see the Compile CPi-BV070WR advertisement and the ComfilePi homepage on the various purchase/product pages.

How to Check Free Disk Space on Ubuntu & Other Linux