IAPCrazy: Today, through this article, we will guide you with a new topic of neglecting in-app purchases using IAPCrazy. If you are one among the tech emerging youths who love to access all those premium features which are restricted under IAP (in-App Purchase)? Then you might be in the right place. Here we have listed how to access those restricted premium features of apps using IAPCrazy in gadget with iOS 10.3.3 and above.

Wondering what IAPCrazy is? Those who have read our previous articles about LocaliAPStore and IAPCracker, this is also related to the same. You can make use of anyone among these apps to crack your iPhone’s in-app purchases. You will learn how to install IAPCrazy on your iPhone or iPad, and how IAPCrazy on iOS 10.3.3 works. IAPCrazy is a tweaked app of Cydia that not only lets you bypass the in-app purchases. But also allows you to enjoy the premium features of the app that you are using.

You need not pay any money to access these premium apps and keep entertainment to the core. To do this, you have to provide fake details on the payment page, otherwise, you may not be authorized. Once you install IAPCrazy, it takes that responsibility and provides you the ultimate access to premium features. 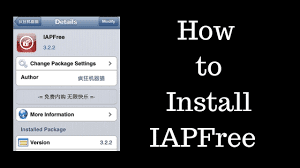 What is required to install IAPCrazy on your Apple device?

Before you intend to install IAPCrazy on your iPhone or iPad, you should install the Cydia app on your iPhone. As IAPCrazy is a tweaked app of Cydia, without installing it, you cannot have IAPCrazy on your phone. Prior to IAPCrazy and its alternatives, most users were using only Cydia to neglect to purchase in-app premium features. However, with both IAPCrazy and Cydia, you can avail of a few in-app benefits such as gold, coins, cash, diamonds, etc.

IAPCrazy uses a technique called mobile substrate for hiding your ‘in-app premium features’ activities from the app developer. Otherwise, there are high chances that your account may get blocked. Therefore, you should have everything properly installed before you proceed with accessing premium apps.

Prior to proceeding, as aforementioned, make sure that you have installed Cydia on your iPhone. The following step-by-step procedure works for iOS 10.3.3 and greater versions as well.

Again, before installation, your iPhone must be jailbroken. Plenty of software and tools to jailbreak your iPhone. But installing Cydia, will automatically do this job and clear your way for the installation of IAPCrazy. You can even search on Google for steps on how to jailbreak the iPhone, by providing its iOS version or model number. Here are the steps that you have been waiting for, to bypass your favorite app’s in-app purchases.

Note that not every app will have in-app purchases or premium features. You can refer to the sample list of apps that come under this category, in the following section.

Step 1: Tap the Cydia app on your iPhone and open it.

Step 2: Next, go to Sources tab and tap Edit that appears on the top-right of the page.

Step 3: Now, press the Add button on the top-left of the same page.

Step 4: When you prompted to enter the Cydia Repo source URL, choose one and provide it in the URL field that appears.

Step 5: After entering the URL and the page opens, look for IAPCrazy.

Step 6: Follow the prompts on the page accordingly and complete the IAPCrazy installation process.

Step 7: Rush to Settings and tap IAPCrazy and then tap Enable it.

Step 8: Reboot your iPhone or any Apple device for the changes made effective.

You are done with installing IAPCrazy and to verify if it has been successful, you can try accessing the premium features of any app. Therefore, for your sake, here is the list of apps that IAPCrazy works well with.

This may not be the complete list but at least most of you might be using many of these apps. Our expert team had tested all those apps in real and provided you the list.

Apart from that, you can find this IAPCrazy helps you to access the premium features of a lot more apps. Meanwhile, the makers of IAPCrazy keen on updating their product owing to that you can avail more exciting features on every update.

To aware of the latest updates from the makers keep in touch with our blog. Else, you can simply join the community support offered by the developers of IAPCrazy. By doing so, you can able to aware of all those latest news and updates.

Installing IAPCrazy is not a big deal if you follow the procedure provided in this article appropriately. If any of the app in the list is not working for you with IAPCrazy, you can try using its alternatives such as LocaliAPStore, IAPCracker, or iAPFree as mentioned previously.

If you need any help with the installation of IAPCrazy or Cydia, we are always available to assist you. Meanwhile, if you have any feedback or comments passed on this article, you can either leave a comment or write to us by dropping an e-mail.