BEST NES GAMES: The Nintendo Entertainment System (NES) was no less than a monopoly gaming console that defined home entertainment and gaming for those who spent their childhood in the 1980s and late 1990s.

With such a successful history, NES gaming lost its blues because who in today’s busy world, who has the time to sit and enjoy the gaming culture. So with this article, we would guide you through the iconic era in gaming history. With a list of 700+ games, NES saved the gaming culture and turned it into a new trend.

NES gave rise to many franchises and many popular characters like Mario which are still loved by children today. The excitement this gaming console that you end up playing the game standing while you started it resting in the most comfortable position. 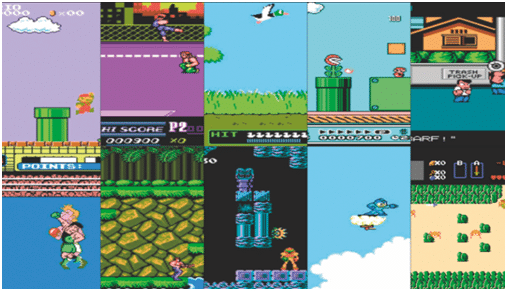 From the never-ending list of the Best NES Games, we had to pick the cream layer to give you just a few games which will be exciting forever. The list of the best of best goes like-

You all definitely knew this game had to be in this legendary list. Mario is the most iconic gaming characters of all time. This game is probably the best NES game of all time. Mario has been throughout NES’s existence. This particular game, Super Mario Bros. ruled for three decades through the Nintendo gaming franchise.

The character, Mario runs through a path and eats mushrooms to get superpowers and grow in size and kills turtles by simply jumping on them and enters a castle through tunnels and there completes a level. This game had great technical effects, with smooth scrolling effects.

Developed by Konami, Contra made a remarkable impression on the NES gamers in the arcade title. Contra can be best explained as the Call of Duty of today’s world. In this game, two commandos, Bill Rizer and Lance Bean are sent to an island to fight and destroy the enemy forces who intend to wipe out humanity.

Though this seems like a difficult mission, all this game comprised a ‘fire’ button and just run. One famous cheat code of Konami gave you extra 30 lives. Over the decades since its creation, Contra still is one of the ‘must play’ game.

Who as a kid would not want to be a vampire hunter? The character Simon Belmont uses his magic whip to take off vampires and zombies to get to further levels. Castlevania had great controls and amazing music to make itself as one of the Best NES Games of all times. Every player begins his game with 4 lives and 5 hearts.

The player should complete the stage before the timer goes off. Whenever Simon is attacked, the health meter decreases, and on depletion of that health meter, Simon falls in a pit which indicates game over. Throughout the game, the player can use various weapons though only one weapon can be used at a time.

Originated from the house of Nintendo’s arcade title, Mike Tyson’s Punch-Out!! features a boxer, Mac boxing his way through the various levels of boxing rounds facing various fictional fighters. Mike Tyson is a real-life personality who is a boxer and fights for the World Heavyweight Championship.

The controls of Little Mac are limited to left and right punches, right and left body blows, and a very strong uppercut. The uppercut is usually a game-changer and can be used only when the player gets a star. A player can get up to 3 stars only at once and the uppercut can be used by simply clicking on the star.

One of the most powerful games in the history of Best NES Games. In this game, the character Samus is controlled by the player who is put free in an open-ended area with no waypoints or maps and with numerous doors and elevators. The player hunts for the Space Pirates who are the enemies to be killed.

The character, Samus is a female who begins the game with a power beam as the weapon and with only one able to jump. The weapons and abilities are improved with levels surpassing. This game has a really attractive space interface which arouses interest as well.

Duck Hunt is a mild shooter game developed by Nintendo. Duck Hunt did not make it really by itself in the Best NES Games but the credits of being recognized are its bundling with the Super Mario Bros.

This game involved killing a number of ducks to advance to the next levels. The additional equipment this game required is the NES Zapper Light Gun which is controlled and the actions are depicted on the screen. The fun part is a dog that appears on the side of the screen who will laugh at the player every time the player misses a shot on the duck. The game initially seemed easy to the gamers but shooting 10 ducks was never an easy job.

Kirby’s Adventure rolled out in 1993 until which most of the gamers were done with the era of NES gaming. But the Japanese game developers did not the NES trend fade. Kirby’s Adventure, the successor of Kirby’s Dream Land featured a cute little pink puff named Kirby. Kirby can move left, right, crouch and jump and to attack, Kirby inhales the enemies or objects and spits them as stars. The ultimate mission of Kirby is to defeat the evil, Nightmare using the powers of a rod and keep intact the Fountain of Dreams.

Read Also: How To Make A Discord Bot: Ultimate Guide for 2022

Overall, Kirby’s Adventure is a fun game that delightful music and attractive colors used in the gameplay and surely makes to the list of the Best NES Games.

Every game has its own virtues which makes it special and memorable for every gamer. If we missed out on any game which shall be in the Best NES Games, do let us know in the comments section below. Happy Gaming!!